It seems like being around Kevin Durant in Brooklyn has really rubbed off on Spencer Dinwiddie.  If you’re not familiar by now, Dinwiddie has stated that he’ll allow fans to determine what team he plays for next and has also opened up a $24M GoFundMe project.  If this isn’t the most outlandish thing I’ve heard since Durant chose to make a pit stop in Golden State, then I don’t know what is.  Let’s dive deep and address some of the glaring questions that have been created from this nonsensical yet potentially game-changing effort.

Here are the rules for Dinwiddie’s $24M GoFundMe: If the goal of $24,632,630 USD (which is essentially equivalent to 2625.8 Bitcoin) is reached, then he will allow fans to select which team he will sign a one-year deal with next.  If the goal is not reached, he will donate all of the proceeds to charity.

Nets guard Spencer Dinwiddie (@SDinwiddie_25) says he will sign a one-year deal with the NBA team fans decide if they reach Bitcoin target of roughly $24,632,630 on a GoFundMe. Dinwiddie’s statement: pic.twitter.com/oebwkoFBEO

It seems like Dinwiddie is asking a hefty price just so fans can choose where he’ll play basketball for one year.  while millions of more dollars will fall into his pocket.  Let’s face it, worst-case scenario could be that Dinwiddie averages about 21 PPG on the Cleveland Cavaliers for a season.  Quite frankly, I think he’ll be a key part on the Nets alongside Kyrie Irving and Kevin Durant.  It’s improbable that those two can do it alone.  And Spencer’s brand would most likely benefit more from being on a bigger stage in the playoffs as opposed to ripping up the bottom half of the league like Bradley Beal has done this season.

When we have a situation like this (nobody else has attempted to raise cryptocurrency to allow fans to choose their next NBA team), some really obvious questions must be asked.

Is this type of thing within the rules of the NBA?  I was always under the assumption that teams got to choose which players they want within their organization, not the other way around.  Players like LeBron are desired by the entire league, so that’s what enables those types of players to choose their destination.  I don’t know about you, but I don’t see Spencer Dinwiddie on the LeBron James‘ level…at least not yet.  At any rate, Dinwiddie seems to have covered all of his bases.

Is almost $25M worth the price to choose where to you’ll see your favorite player for just one year?  Ultimately this is up for the fans to decide, but Spencer Dinwiddie should feel extremely blessed to be able ask $25M for just one year of playing basketball.  You would also have to question what would happen after this one season is up, and if he’ll be setting up another go fund me after this one.  If this is the case, this’ll be the most business-savvy move by a baller in NBA history. 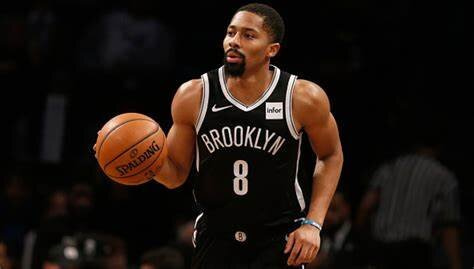 This isn’t Spencer’s first time dabbling in basketball and cryptocurrency.  He’s come up with a plan so that investors can buy a share of his name and likeness;l in hopes of getting a slice of any future NBA contracts that he shall accrue.  It seems like the sky is the limit for Spencer Dinwiddie and his crypto-based basketball ventures.