If you’re a stout NBA fan, you’ve seen the Slam Magazine photo shoot with Karl-Anthony Towns, D’Angelo Russell, and Devin Booker.  All three are members of the 2015 NBA Draft, and we’d imagine that these three hit it off quite well.  Contrary to popular belief, this big 3 on one team could be a force to be reckoned with for a long time. 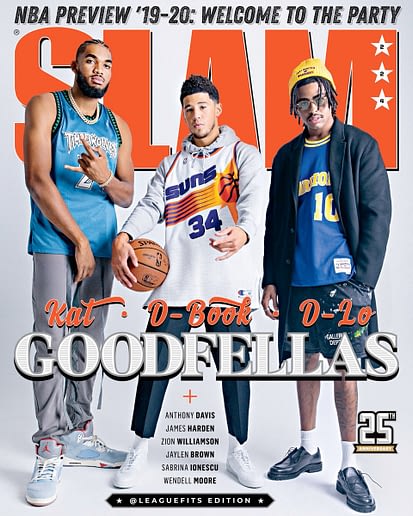 Some of the main doubts about the trio are that they “don’t have the drive to win” and “none of them play any defense.” The game changes when you’re around guys you care about and want to play for.  These guys have four All-star appearances between them (Towns with 2).  The only reason this partnership hasn’t been more widely publicized is the lack of playoff appearances by the three players (only 2 first-round losses).

While the Minnesota Timberwolves do have the first overall selection in this year’s draft, we could see them deal that pick for Booker and a few other pieces.  It’s so easy to get caught up in the shiny new toys that consist of freshly drafted rookies, but you can never discount experience.  Devin Booker is only 24 years old, and we can expect a player like him to be able to play for at least 10 more seasons.

If the average NBA player hits his prime at the age of 28, Towns, Russell, and Booker would have 3+ years of playing together before reaching said prime.

The bottom line: adding these three players together at the ripe ages of 24 will give Minnesota an excellent chance at winning at least one championship.  Which is paramount for an organization that has never won an NBA Finals.  This is exactly what they (Timberwolves) need.